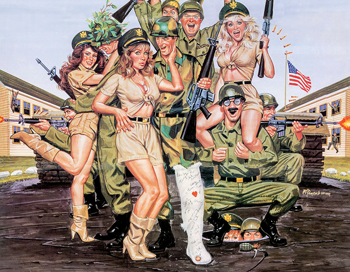 "Then he used his fight money to buy two of every animal on earth, and then he herded them onto a boat... and then he beat the crap out of every single one!"
— The Soldier

Simply put, when a work centered around military is Played for Laughs. This particular brand of funny centers on stereotypically dim-witted personnel, asshole officers, and naive recruits. And a Ragtag Bunch of Misfits.

Comes in two flavors: Wartime and Peacetime. Expect a wartime military farce to turn Darker and Edgier in the penultimate act when the "real war" comes calling for the characters (and oftentimes, but not always, a Misfit Mobilization Moment).