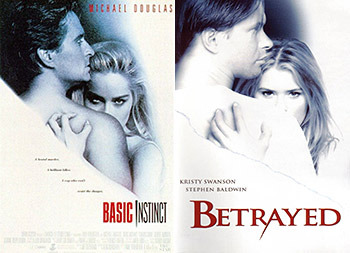 Covers Always Lie taken up by marketing. Copycat Covers tend to naturally occur during the release of more popular and better movies and games, and their aesthetic similarity seems intended to confuse less observant customers. This is especially common with stories that were originally in the public domain (Disney is a major victim of this) but might also be done retroactively long after the knockoff's release.

This is standard industry procedure with books. Whenever a movie or TV adaptation of a book comes out (or of a book on the same topic, or a completely unrelated topic by the same author), a new edition of the book will almost always be printed with a Copycat Cover and a blurb on it somewhere hawking the movie or show.

Copycat covers can usually be spied out by being much lower quality and suspiciously lower in price.

A tactic often employed by The Mockbuster. See also Trend Covers. "The Breakfast Club" Poster Homage is a Sub-Trope.