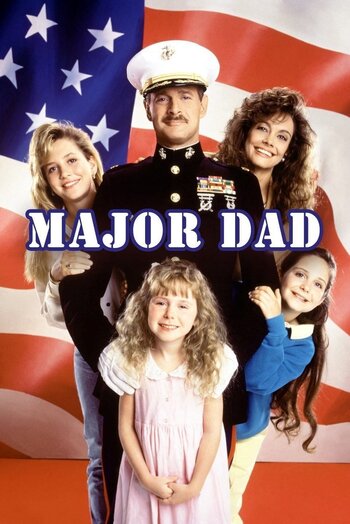 The joys of family life.
Secretary: I like Marines. They're polite, respectful, and very friendly.
[The Major knocks down the screen door as he walks through it]
Polly: They're strong, too.
Advertisement:

This is not your standard sitcom. This is the story of Major John McGillis and the woman he fell in love with. And her three daughters. Major Dad lasted 4 seasons and 96 episodes (September 1989-April 1993).

So what separates this sitcom from all others? First of all, the military, specifically the United States Marine Corps, is portrayed in a positive light. Second, each plot does not revolve around the characters passing around the Idiot Ball and blatantly lying to each other. In fact, some of the characters might be considered a little too honest at times.

The entire series is available for viewing on Hulu and, from September 2021 to August 2022, on Netflix.