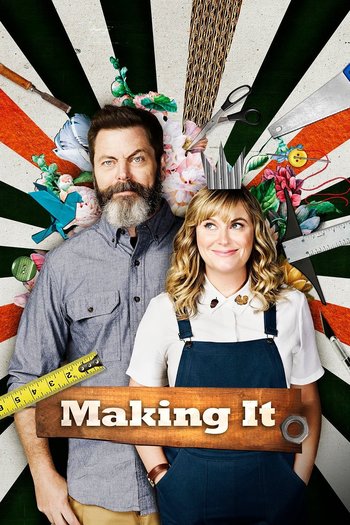 Making It is an NBC competition show hosted by Parks and Recreation castmates Amy Poehler and Nick Offerman.

Revolving around the theme of craftsmanship, the show brings together a diverse group of competitors to show off their creativity and technical skills using a wide variety of techniques and materials. They work on their projects on a farm, in and around a large barn converted into a crafting studio.

Each episode requires the competitors to complete two challenges:

Each challenge is judged by crafting icons Dayna Isom Johnson and Simon Doonan, who give friendly critiques.

It is billed as a feel-good show that completely avoids conflict and melodrama normally seen in competitive shows, and somehow manages to be even Lighter and Softer than The Great British Bake Off and The Great British Sewing Bee (which is no mean feat).

The first season aired in the summer of 2018. The second season aired eight episodes in the span of two weeks in December 2019, and a third aired in summer 2021.