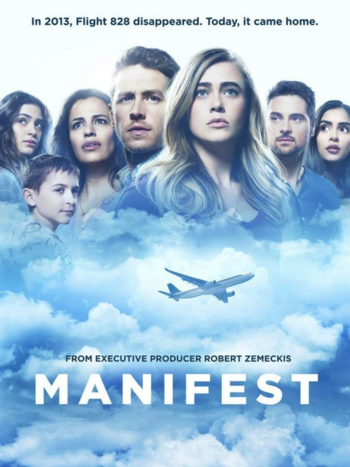 "The problem, ladies and gentlemen, is your plane departed Montego Bay, Jamaica on April 7, 2013. Today is November 4, 2018. You've all been missing, presumed dead, for five and a half years."
Advertisement:

Manifest is a supernatural drama TV series that began airing on September 24th, 2018 on NBC. It depicts an airline flight that vanished and was presumed crashed, only to reappear and land safely five and half years later. The authorities are faced with a seemingly unsolvable mystery, and the passengers and crew must now deal with the lives they unwittingly left behind.

The first act can be viewed here.

The series was cancelled in June 2021 after the season three finale before being saved by Netflix for a fourth and final season in August.