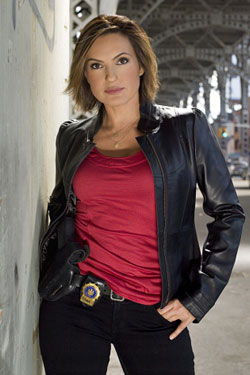 In any given Crime and Punishment Series or film, the chances of encountering a Fair Cop are high.

A Fair Cop is any police officer who is ridiculously attractive, ridiculously young, or both. This should not, however, carry with it assumptions that they are dumb. Call it the police version of Hot Scientist or, even closer, Good-Looking Privates. TV cops almost never have a mustache.

The title is a play on the British and Australian expression "It's a fair cop", said when one admits having been caught fair and square. See also Firemen Are Hot and Good-Looking Privates. Cousin to Hot Men at Work.

You are not particularly likely to see a Fair Cop in a stripper's police outfit — although you may see him or her as a Dirty Harriet, which gives a whole new meaning to the motto "To protect and to serve".