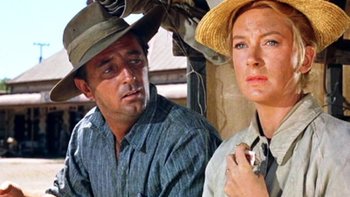 The Sundowners is a 1960 film directed by Fred Zinnemann, starring Deborah Kerr and Robert Mitchum. It was adapted from a 1952 novel of the same name by Australian writer Jon Cleary.

Paddy Carmody (Mitchum) is a drover in 1920s Australia. Paddy, his wife Ida (Kerr), and their teenaged son Sean live the lives of itinerant wanderers, moving flocks of sheep around Australia for pay, living out of a tent. Paddy strongly prefers the nomadic life, having a mortal terror of being tied down to one place and burdened by a mortgage. Ida, however, has grown weary of life as a drover, wanting nice clothes and a kitchen of her own instead of cooking over camp fires.

Shot on location in the Australian countryside and famous Outback.