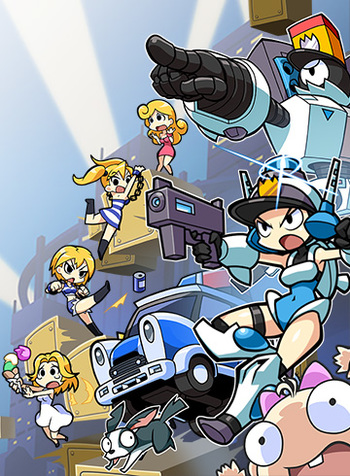 SWITCH IT UP!
Mighty Switch Force! is a trilogy of Puzzle Platformer games created by WayForward Technologies, and functions as a part of the company's greater Mighty series of puzzle games (following Mighty Flip Champs! and Mighty Milky Way). The key mechanic of these titles is block shifting: you're able to shift certain blocks in each level in and out of the foreground to transverse the level, solve puzzles, and occasionally redirect or defeat enemies (or yourself, if you aren't careful) with the press of a button.
Advertisement:

The first entry, Mighty Switch Force, was originally released on December 22, 2011 for the Nintendo 3DS eShop. As a member of the Galactic Penal Squad, cyborg police officer Patricia "Patty" Wagon must locate and capture a group of convicts called the "Hooligan Sisters", who have not only escaped captivity, but have also unleashed monsters all over Planet Land. A HD version of the game, subtitled Hyper Drive Edition, was released as a Wii U launch title and later made available on Steam a few years later.

The sequel, aptly-titled Mighty Switch Force! 2, was released for the 3DS eShop on June 13, 2013. This time around severe fires are ablaze all over Planet Land, so Patty swaps out her cop gear for firefighter equipment in order to rescue the now-reformed Hooligan Sisters (as well as some crying babies) who have been trapped by the inferno. In addition to the core block shifting mechanic is your new gun: a dousing device that allows for new puzzles involving creative use of fire and water to complete your objective. A HD version was released for the Wii U later that year. A spin-off Pipe Mania!!-esque puzzle game based on this entry, called Mighty Switch Force! Hose It Down!, was released for iOS and Steam in 2015.

The third game, a pseudo-prequel called Mighty Switch Force! Academy, was released for Steam on November 23, 2015. It follows a younger Patricia during her early days at the Planet Land Police Academy, undergoing a virtual reality training simulation that immediately malfunctions, disabled the safety protocols and trapping her in a series of tests. The usual gameplay has now been made full-screen, and the title features four-player simultaneous gameplay, where players either compete or cooperate to solve the puzzles.