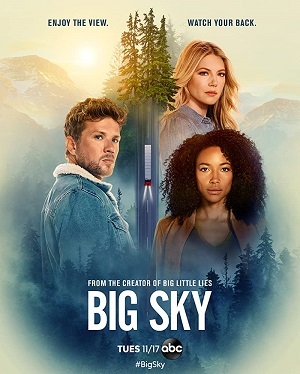 Big Sky is an American Police Procedural drama television series from ABC, created by David E. Kelley and based on the 2013 novel The Highway by C. J. Box. Outside the United States, the series was released via Disney+'s Star hub in many territories.
Advertisement:

Our story starts with the two young Sullivan sisters, Danielle and Grace, driving through a Montana highway on their way to visit Danielle's boyfriend Justin, when they come across someone nefarious and disappear into thin air. But their disappearance doesn't go unnoticed, and soon they have Justin's private detective father Cody, Justin's ex-cop mother Jenny and Cody's partner Cassie looking for them, with the help of trooper Rick Legarski from the Montana highway patrol. It soon becomes apparent that the sisters are only the latest in a long string of young women disappearing on that county, and the race against the clock is on to find them before they meet a permanent end.