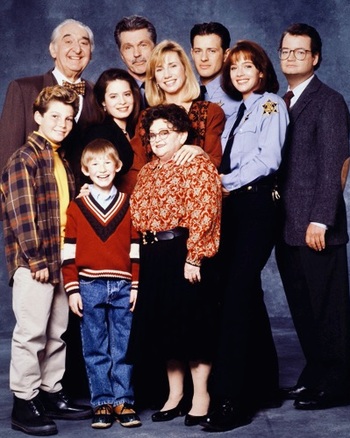 Welcome to the small town of Rome, Wisconsin, where everyone knows everyone and the bizarre is an everyday occurrence. Created by David E. Kelley, the Emmy Award-winning family/cop/legal/medical dramedy Picket Fences ran on CBS for four seasons (1992–96) and 88 episodes, before it was cancelled for being a little too weird for its own good.

The show centers around the residents of Rome, in particular the functionally dysfunctional Brock family consisting of the town's Sheriff, Jimmy Brock (Tom Skerritt); his wife, Jill (Kathy Baker); their daughter, Kimberly (Holly Marie Combs); and their two sons, Matthew (Justin Shenkarow) and Zachary (Adam Wylie). Sheriff Brock, along with his deputies at the Rome Sheriff's Department, sometimes struggles to maintain order faced with such strange crimes and occurrences as cow udders exploding and a spate of people turning up dead in freezers. During its tenure, the show also dealt with unusual-for-the-time topics including (but not limited to) abortion, homophobia and LGBT adoption, transsexualism, racism, belief in God, medical ethics, polygamy, polyamory, adolescent sexuality, date rape, masturbation, the Holocaust, cryonics, shoe fetishism, spontaneous human combustion, and constitutional rights.

Thanks to Executive Meddling and various legal battles, only the first season has been released on DVD.note In the United States, anyway; all four seasons have been released in both Australia and Germany, although the picture quality suffers due to the PAL frame rate. Also, there is a release of the entire series for Region 0, meaning that it's theoretically a universally-accepted DVD; however, it's anyone's guess as to its actual playability.

Now with an added character page that could do with some more love.

This show provides one or more examples of: