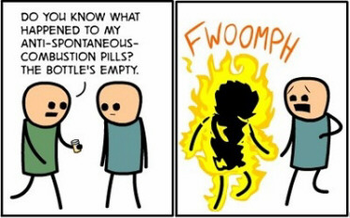 "You know, dozens of people spontaneously combust each year. It's just not really widely reported."
— David St. Hubbins, This is Spın̈al Tap
Advertisement:

A fire or explosion occurs from within a person's body without a direct external cause for ignition. There's often no warning and not much in the way of an explanation.

A classic Urban Legend, hundreds of "allegedly true" accounts of this phenomenon have been reported for over centuries, the oldest known stories dating from as far back as the the mid 1600's, and thanks to the aura of mystery and strangeness surrounding these incidents, Spontaneous Human Combustion is an anomaly that some can’t help but try and find a valid explanation for.

As such, works of fiction tend to explore this subject in a few ways. Comedic works, more often than not, tend to let such occurrences happen without a clear explanation of how it happened being given. On the other hand, more serious stories—especially Speculative Fiction works or strange tales about the paranormal—may try to provide some kind of explanation and may even reveal an external cause (likely one that is pseudoscientific and even more bizarre than spontaneous human combustion already is on its own—possibly involving anything from aliens or ghosts causing it, an uncontrolled Pyrokinetic ability, or something even weirder).

In Real Life, occurrences that look like this trope are usually explained by the "wick effect".

See Also: Made of Explodium, Man on Fire.

Not to be confused with Wreathed in Flames.

Not actually the Inverse of the trope External Combustion.

See here for the film.

Naturally, as this is a Death Trope, be prepared for some spoilers.