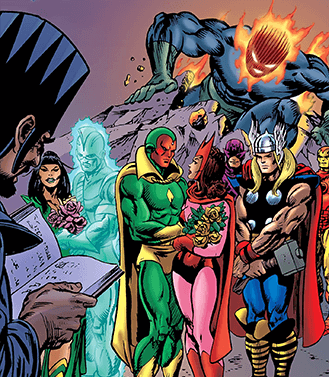 "Mantis, Scarlet Witch, do you all accept your respective husbands until Disney Death do you part, or until you Ascend to a Higher Plane of Existence, or until you become Too Powerful to Live, or whatever...?"
"Did you ever hear the old song 'Going to One Wedding Brings on Another?'"
— John Thorpe, Northanger Abbey
Advertisement:

After the plot is done, multiple couples are paired off and there's a massive wedding ceremony.

According to Christopher Booker, the definition of a comedy (in the classical sense) is where three or more relationships are in disarray and/or kept apart by one central relationship being kept apart, so fix the hero's relationship, and the others fall into place. By that logic the most logical ending to a comedy would be to have the side relationships work out when the central one does, so it makes sense that things become fine in the end.

Or it could be that people like a happy ending and marriage is one of the accepted happy endings so multiple marriages is even happier.

Subtrope of Wedding Finale. See: Everyone Must Be Paired, Pair the Spares and Cleaning Up Romantic Loose Ends where multiple pairs hook up, but don't necessarily get married. May result in a Babies Ever After epilogue. Sillier shows might have one character Marry Them All instead. Compare and contrast Why Waste a Wedding? (mainly type 1).

Examples of this trope from media:

Alternative Title(s): Everyone Gets Married