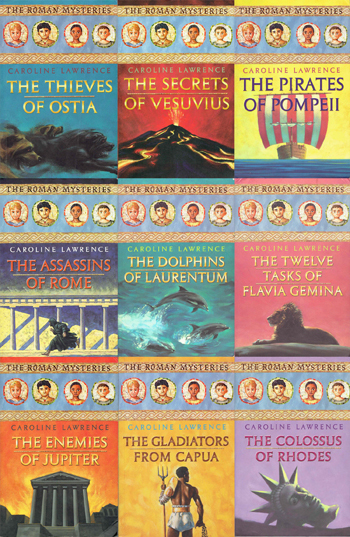 The Roman Mysteries is a series of historical detective novels for children, written by Caroline Lawrence. It is set in The Roman Empire during the 1st century AD. The books follow four children who solve mysteries and have adventures in Ostia, Rome, and throughout the empire. The lead character, Flavia, a middle-class Roman girl who lives in Ostia, is a self-styled detectrix. She is supported by Nubia, a slave girl from Africa; Jonathan, a Jewish boy; and Lupus, a mute beggar boy. CBBC adapted some of the books into a Live-Action TV show.

Caroline Lawrence has started a sequal series called The Roman Mystery Scrolls, written for a slightly younger audience. She is also the author of The Western Mysteries.

The main novels of the Roman Mysteries series are:

The TV Episodes are listed at Roman Mysteries (TV series).

The books series provide examples of: