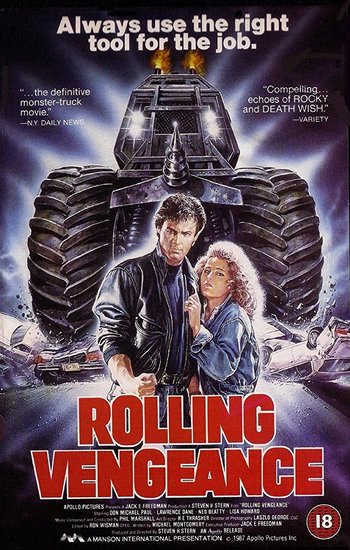 "Always use the right tool for the job."
— Tagline
Advertisement:

Rolling Vengeance is a 1987 revenge film featuring a monster truck as the tool of retribution. Yes, you read that right.

Directed by Steven Hilliard Stern and starring Don Michael Paul and Ned Beatty, the movie follows young truck driver Joey Russo whose home town is constantly tormented by local bigwig Tiny Doyle and his drunken sons. When Russo's family complains about their actions, Doyle's sons drunkenly run Joey's mom and younger brother and sister off the road, killing them. Joey and his father confront them over this and the Doyle boys get revenge by raping Joey's girlfriend and killing his father. Angry at the ineffectual law that lets them go free, Joey swears revenge and gets to work in the family garage, building a hellacious-looking monster truck to hunt down those responsible.

This is a strange piece of Canucksploitation from the only decade in which a monster truck could be a major plot device, the 1980s. Like many exploitation films of the era, was made taking advantage of a loophole in a Canadian tax shelter law, lest you think the filmmakers had any delusion they were making art. If you want proof that some movies are made for no reason than to cash in on a fad, look no further. Cheesy and predictable, it still features some well-directed action scenes with the monster truck.