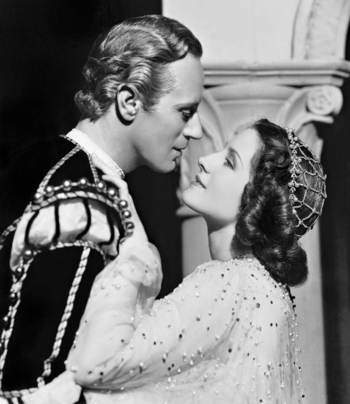 Romeo and Juliet is a 1936 film directed by George Cukor.

It stars The Marx Brothers in a story where—no, just kidding, it's an adaptation of William Shakespeare's Romeo and Juliet. The Montagues and Capulets, "two households both alike in dignity" of Verona, hate each other for reasons unknown. One Romeo Montague is depressed because he has just been dumped by his girlfriend, Rosaline, a distant relative of the Capulet family. He crashes a Capulet party in hopes of seeing Rosaline, but once he meets Lord Capulet's beautiful daughter Juliet, he instantly falls in love and all thoughts of Rosaline are forgotten.

Juliet falls in love with Romeo as well, despite the fact that her parents are pushing her to marry another nobleman, Paris. With the help of Juliet's faithful Nurse, the two are married in secret. However, the next day Juliet's cousin Tybalt kills Romeo's cousin Mercutio in a duel, followed by Romeo killing Tybalt. Romeo is then banished from Verona. Can these Star-Crossed Lovers find happiness? Of course not!

Leslie Howard and Norma Shearer star as the title characters (they were 43 and 34 years old respectively). Other members of the All-Star Cast include Basil Rathbone as Tybalt and John Barrymore as Mercutio.