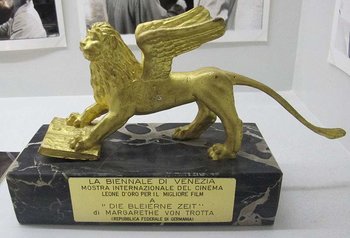 The Golden Lion (or Leone d'Oro) is the main prize given at the Venice Film Festival and is, as may be obvious, a golden lion but with wings.

The award was given out as Best Feature Film at the first post-war Venice festival in 1946, and then the Grand International Prize of Venice over the next two years. In 1949 the trophy was changed to the "Golden Lion of Saint Mark

", namely the iconic winged lion, and the trophy's name was simplified to "Golden Lion" in 1954. There was a pause in the handout of the lions from 1969 through 1979 after the 1968 cultural revolution — traditional awards appeared somewhat obsolete. Additionally, the film by Alexander Kluge that won it in 1968 was supposedly so radical that it embarrassed the jury themselves. The award made its return only with the arrival of the 80's when indifference and camp stepped in.

Winners of a Leone d'Oro