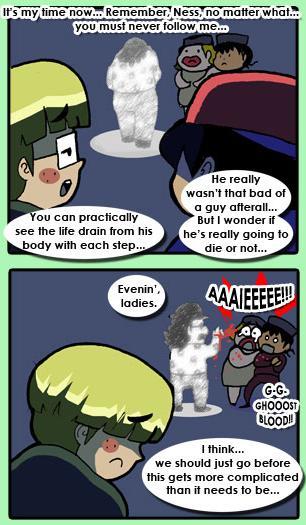 Also a way to ambiguously die.
"After three days of delerium, Lady Laena passed from this mortal coil. During her final hour, it is said, Lady Laena rose from her bed and made her way from her room, intent on reaching Vhagar that she might fly one last time before she died. Her strength failed her on the tower steps, however, and it was there she collapsed and died."
— The Rogue Prince, or, A King's Brother
Advertisement:

A character who is mortally injured simply walks away from whatever it was that they were doing before.

Reasons for this vary, the most common ones are that the wounded person is in a haze of shock from the wound, that the person is hallucinating or having a genuine supernatural vision and are trying to reach it, are so determined to reach some sort of goal or object that they make one final attempt before they die, or simply want to go somewhere that they can die more peacefully. This trope can become quite symbolic of walking away from a conflict or the mundane complications of life when faced with death staring them in the eyes, or a character walking away from one's life/past deeds, especially if the character regrets or would want to atone for those things.

This can be Truth in Television: many animals, at least if they're still able to walk, will go off to find a quiet place to die when they know their time is near.note This is most likely because an animal's natural reaction is to flee from pain, but as the pain of death cannot be escaped, the animal retreats to the most private place it can reach. Naturally this can apply to humans as well.

Often occurs beside One Last Smoke. Likely to happen in the aftermath of a Gun Struggle. May overlap with tropes such as Secret Stab Wound or Mortal Wound Reveal if no one realized the character was so seriously injured, and Distracted from Death if no one notices their death until after they've died. If the walk is a particularly long one or the character manages to give a message to someone at the end of it, then it overlaps with Almost Dead Guy.

Compare and contrast Face Death with Dignity, Disappears into Light, No Body Left Behind, The Last Dance, You Are Already Dead, and all versions of Time-Delayed Death.

As a death trope, there will be unmarked spoilers!