Tabletop Game / Killer Bunnies and the Quest for the Magic Carrot 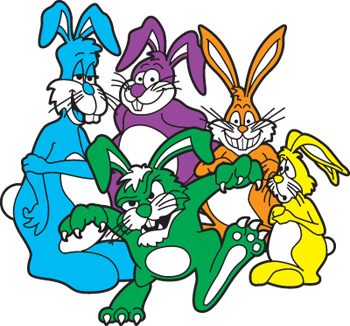 It sure is.
Quite possibly the most random card game ever.

The simplest way to describe it is to set up a Tabletop RPG and eliminate the RPG bits. You have several colorful twelve-sided dice, a large deck of brightly colored cards, several instruction manuals, 17 expansion packs, each of which brings the game to a higher, more exciting, and definitely more confusing level. And that's not including the Spiritual Successor, Conquest.

There are three main goals of Killer Bunnies: Keep your bunnies alive, kill other players' bunnies, and get the Magic Carrot. Everything else is basically fun fluff and randomly awesome. There is an entire booklet devoted to the rules and regulations of the game, so I won't confuse you there. The magic of this game is the utter randomness that goes into playing and the various degrees of horribleness that go into killing bunnies.

Weapon cards range from 1 to 31 (you have to roll higher than the level indicated to defeat the card) and are varying degrees of silliness.

During the course of the game you will have the opportunity to collect carrot cards. The game is over when the carrot card pile is empty. This can take anywhere from half an hour to three-and-a-half days, depending on how many times people forget what the main objective is. Once the pile is over, the magic carrot is chosen at random, and whoever has the carrot wins.