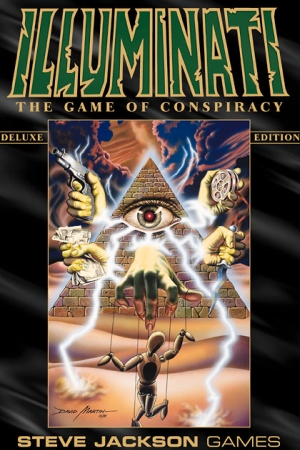 "They're all around us. Secret conspiracies are everywhere, and where can you find the only truth? Certainly not in the game of Illuminati. Fnord"
Advertisement:

Illuminati: The Game of Conspiracy is a Card Game created by Steve Jackson Games (also known for their game Munchkin). In this game, there are secret societies trying to take control of the the world and its residents. The twist? You're one of those societies, and so are the other players. Every different organization has its own goal and powers, with the ultimate plan of being the only secret society left. Over the years it has been offered in both fixed-set and collectable versions, while a licensed play-by-email version of the game is run by Flying Buffalo.

It was inspired by the Illuminatus! Trilogy and the game's official website is here.

SJG also made an expansion for the Role-Playing Game GURPS with the same name, which won the Origins award for best role-playing game supplement in 1993.