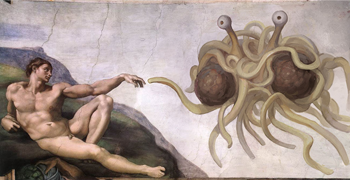 Touched By His Noodly Appendage.
Advertisement:

A made-up religion that exists to parody some specific existing religion, a group of religions and religious beliefs, organized religion in general, or just any kind of religious belief. It often takes the form of a Cargo Cult, a God Guise, some bizarre Crystal Dragon Jesus cult, or a pastiche of a Real Life religion with Serial Numbers Filed Off. For extra laughs, a Churchgoing Villain may follow this faith devoutly, or someone who's Hiding Behind Religion may use it as a smokescreen, perhaps also invoking Against My Religion to weasel out of some unpleasant obligation.

It can be a risky move sometimes, since, religious freedom being what it is, people are generally allowed to believe in whatever they want. At times, a specific belief just might dovetail with a parody.

See also Path of Inspiration, which is this with evil instead of funny; Corrupt Church, which is against organized religion; and Church of Happyology, which is a subtrope that parodies a very specific religion.

See also: Anvil of the Story, Religion Is Wrong; the secular version is the Brotherhood of Funny Hats. An Animal Religion or a Robot Religion can parody an actual religion. Contrast Saintly Church, Religion Is Right. If the parody is used to actually deceive people—which, considering Poe's Law, is far from impossible—it becomes a Scam Religion.