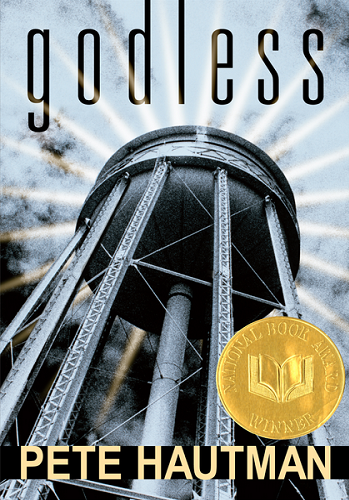 Godless is a Young Adult novel by Pete Hautman.
Advertisement:

Our hero, Bock, Jason Bock, thinks more about a confrontation with volatile Henry Stagg, his friendship with snail- and slug-loving oddball Shin, and his uncertain feelings for pretty Magda Price than he does about his faith. Then a simple gag makes faith the centerpiece of his summer: What if the town water tower is God?

Jason shares his quirky observation with Shin and soon finds himself the head of a new religious sect of "Chutengodians" worshipping the metal edifice they now call the "Ten-legged One." As the hot summer days pass, some Chutengodians begin to take the existential mindgame more seriously than Jason himself. During a ceremonial midnight climb to the top of the water tower, the consequences of their activities have something of a SNAFU. It is then that Jason realizes that the "religion" he created has taken on a life-altering momentum of its own.

The chronicles of the worship of the Ten-legged One includes these storytelling devices: