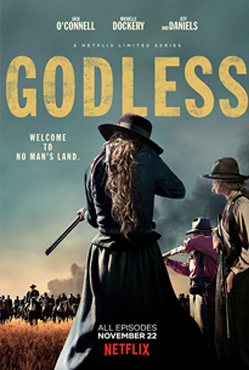 In the mining town of La Belle, 83 men — almost the entire male population — died in single mining accident two years ago. Now, with only half-a-dozen men left and no funds to re-open the mine, the town is desperate for another mining company to come in with money (and men) to let their lives resume. For some of the women who have had to step up and run the town since the disaster, however, they don't want to see themselves squeezed out of their own claims, or relegated back to just being the homemakers and support structure.

Coming into this situation is the much pressing — and bloody — situation of Roy Goode and the Frank Griffin gang. Roy, a deadly gunman and bandit, has split with Frank Griffin and run off with the proceeds of their last heist. Furious at the theft, betrayal, and the loss of his left arm to Roy's gun, Frank is leading his men on a bloody crusade across the region, murdering entire towns for harboring Roy. Half-dead from his own wounds, Roy stumbles onto the farm of Alice Fletcher, who lives on the outskirts of La Belle.

All seven episodes were released globally on 22nd November.