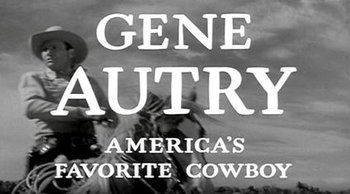 The Gene Autry Show was an American Western series that starred the famous singing cowboy, Gene Autry; his loyal yet klutzy sidekick, Pat Buttram, and his horse, Champion, listed in the opening credits as 'World's Wonder Horse'. The series premiered in 1950 and ended in 1955.