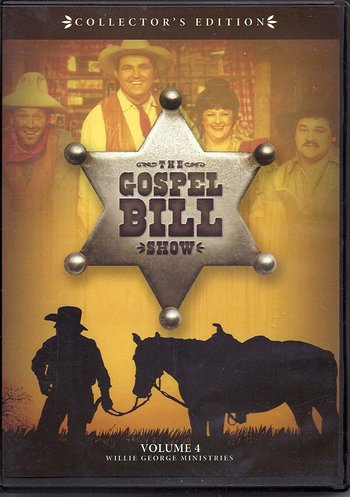 The Gospel Bill Show is a Christian Western live-action show produced from 1981-93note the 1989-90 episodes used the name Adventures in Dry Gulch set in The Wild West; specifically a Southwest Territory (in what's now Oklahoma) in a town named Dry Gulch (because when the town was incorporated, voted it as a "dry" city - as in, not allowing alcohol sales).

Most of the episodes focus on the town's sheriff, known as Gospel Bill (played by series creator Willie George), giving moral advice to a character and/or stopping a plot by one of the villians. The other principal characters are Nicodemus, Gospel Bill's best friend, foreman of the Flying Frog Ranch and frequent sidekick; Miss Lana, the matronly owner of the town's general store/telegraph office; Elmer Barnes, a fishing-obsessed and implied to be somewhat mentally handicapped citizen fond of his fishing worms Inky and Dinky, and T.U. Tutwater, president of the Dry Gulch Bank and Trust and the town's mayor, whose greed tends to be a point of conflict in several episodesnote when his actor, Daine Demaree, left to pastor a church in California in 1990; John Witty took over the part; with the character being renamed T.W. Tutwater for a handful of episodes before being written out late in the series' run. Recurring characters include the series' primary villain, Luther Bedlow (played by Willie George but credited "As Himself"); Orville Cornpone (Rodney Lynch), who starts as Bedlow's dim-witted henchman prior to his Heel–Faith Turn, after which he works for Mr. Tutwater; Ferman Farnsworth (played by Willie George; though the credits alternate between crediting George for the role and an "As Himself" credit), Nicodemus' ornery boss and owner of the Flying Frog Ranch; Miss Trudi Lou, an employee at the Sagebrush Diner (and heavily-implied Lethal Chef) who is the series' only other prominent female character and the object of Nicodemus' affections (incidentally her actress Trudi Blount and Nicodemus' portrayer Ken Blount are married in real-life); Barkimeus, an anthropomorphic dog character (played by Keith Holey in a dog costume) who was a principal in the show's early run but phased out by 1986; the Dough Belly Boys (a trio of overweight, rather dense minor villains played by Ken Blount, Jeff Merrill and Rodney Lynch in which the Running Gag is their trying to find Dry Gulch even as they're in the town), and Johnny Bob MacElroy (Blaine Bartel), a minor character mainly known as The Prankster.

Typical episodes focus on Gospel Bill either dispensing advice to a town member facing some point of crisis and/or stopping a villainous plot. They are usually broken up by puppet segments set in The Present Day (with most characters voiced by Willie George) featuring a kid character named Oogene. He hosts a segment titled "At the Zoo" (occasionally "At the Farm") with Oogene" where Oogene is at a zoo or farm. Frequently (though less common in later seasons) another segment shows Oogene at home with his sister Jeannie Mae in a story related to the main story's moral; alternatively Biblical stories depicted with puppet characters appear. Less common are segments involving a coded message via smoke signals from a Native American {presumably Cherokee given the location} chief named Chief Nowanasinnote No (or don't) wanna sin). Most episodes end with Gospel Bill or Nicodemus Breaking the Fourth Wall to summarize the lesson of the story and, often, give an evangelistic invitation. Typically, this segment is interrupted or preceded by a music video of a Christian-themed original song (again, usually by Ken Blount).

In 1989, the show was slightly Retooled as Adventures in Dry Gulch. Often these episodes have Gospel Bill "out of town" for unknown tasks (by this time, in addition to traveling for children's ministry seminars Willie George was pastoring Tulsa's "Church on the Move"), with Nicodemus often left in charge. Near the end of the series' run outdoor scenes were shot at the Dry Gulch, U.S.A. summer camp for a more realistic look.

The series produced a number of spinoffs, successor series and a Direct to Video film trilogy. Among them are:

Additionally Church on the Move produced a teen-oriented series called "Fire By Nite" with most of the same crew and cast.