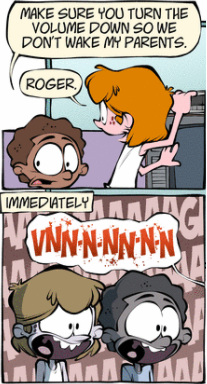 The good news was: The movie didn't affect me at all. I mean, other than the seventeen nightmares, never setting my bare tootsies on the floor again (they say body-stealing ghosts love hiding under beds.), never sticking my head out from under the covers for the next month...or two. Of course, there was the minor problem of breaking into hysterical screams every time I heard strange and mysterious sounds - like my chattering teeth, my knocking knees, or my whimpering between breaths. But other than that, everything was great.
— The Incredible Worlds Of Wally Mc Doogle (following the eponymous character sneaking into an R-rated horror flick)
Advertisement:

Alice and Bob are two mischievous little kids aged around 8-12. One day, they decide they'll go to the movies. Their parents are fine with this, but warn the two of them not to see that new horror film that just came out. Alice and Bob swear they'll see an age-appropriate kid film and go off to the movies innocently. Of course, they'll go see the horror film anyway, either getting in easily or sneaking in if the guy at the ticket booth won't let a pair of kids in. This backfires when they find out how terrifying and gruesome the horror movie is, and nearly end up half-traumatized. The rest of the episode will usually consist of them having nightmares and eventually being outed to the parents at seeing the film. Another common version is the kids watching it at home when the parents are out. Sometimes, though less common, the parents will be there as well.

Of course, in Real Life, things can be a bit more complicated. Anecdotal evidence often is self-contradicting: pointing that lot of children enjoy a good horror movie, while others are badly scared by it. It also doesn't help that this trope is largely reliant on popular knowledge, with actual and trustworthy psychological studies backing (or denying) it being hard to come by.

If this trope pops up in a kids' sitcom, it will almost always overlap with Can't Get Away with Nuthin'. In many cases, a thunderstorm will occur for atmospheric effect, often when the kids are terrified after watching the movie, complete with Dramatic Thunder. See also Girls Are Really Scared of Horror Movies and Scare 'Em Straight. When something like this happens in Real Life, see What Do You Mean, It's Not for Kids?. It can sometimes be inverted when adults are terrified of the movie but kids love it (for example, Neil Gaiman noticed this reaction with regards to Coraline). See also Fridge Horror for that case; perhaps the kids don't understand why the events of the movie are something to be afraid of. It can also be prone to Do Not Do This Cool Thing, if the audience thinks the in-universe movie looks fun, but the characters watching it are scared.

As the examples below will show, this trope is subverted or defied very frequently, and usually very pointedly. Sometimes the child character is scared, but is ultimately glad to have faced their fears, and watching their first scary movie is treated as a Rite of Passage. Other times the writers themselves are horror fans, and are sick of Moral Guardians using their favourite entertainment as a scapegoat.

Contrast with Unabashed B-Movie Fan, who watches monster movies all the time, generally without consequence, and Entertainment Above Their Age, when a kid is fine with adult fiction. Also see Defanged Horrors, for horror movies specifically targeted at kids.

The Belcher kids have a movie viewing of "Again with the Living Dead" with their friends and most of them are too scared to leave after watching it.

The Belcher kids have a movie viewing of "Again with the Living Dead" with their friends and most of them are too scared to leave after watching it.