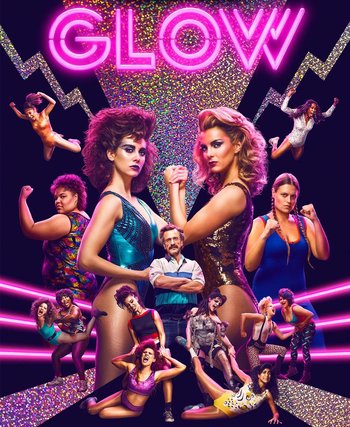 GLOW is a dramedy from Netflix which tells a fictionalized version of the characters and gimmicks of the syndicated all-women wrestling promotion ''Gorgeous Ladies of Wrestling" or GLOW, which ran from 1986 to 1990.

The show stars Alison Brie as Ruth Wilder, a broke, down-on-her-luck aspiring actor in 1980s LA, who finds one last chance for stardom when she's thrust into the glitter and spandex world of women's wrestling.

Alongside other colorful newcomers, Ruth has to deal with estranged friend Debbie Eagan (Betty Gilpin), a former soap opera actor who left show business to have a baby, only to be sucked back into work when her picture-perfect life is not what it seems.

The first season premiered on June 23, 2017; the trailer can be found here

. After a successful second season and third season, it was renewed for a fourth and final season on September 20, 2019. However, on October 5, 2020, it was revealed that Netflix had canceled

production on this final season due to the ongoing COVID-19 Pandemic, ending the series at three seasons.

Beware of unmarked Season 1 and 2 spoilers.

G.L.O.W., G.L.O.W.
That's the name
Women's wrestling is our game
If we play rough, please don't blame us
Our style is wild
And you know you can't tame us!"