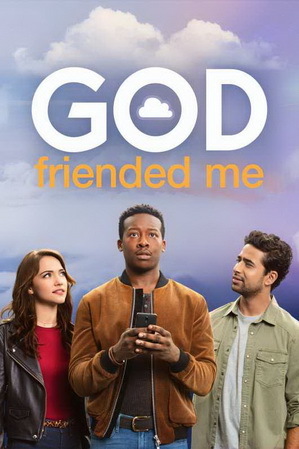 A Hollywood Atheist, a Techno Wizard, and an Intrepid Reporter get a friend suggestion. note  Left-to-right: Cara, Miles, and Rakesh.
"I am your host Miles Finer, reminding you that there is no God, and that is okay."
- Miles Finer aka The Millenium Prophet
Advertisement:

) is the "Millenium Prophet", a podcaster whose show is centered around his debating and defending his atheist views who one day is sent a friend request on his Facebook account from someone calling themselves God. This account directs Miles via a friend suggestion to a man named John Dove whose life is saved after he intentionally steps in front of a subway train. Despite his initial skepticism, Miles follows the next suggestion to reporter Cara Bloom who becomes curious about Miles and his story. In turn, she gains help in finding her mother who disappeared years ago while discovering an unexpected connection to Miles' family.

Miles chooses to continue following the friend suggestions in hopes of finding clues as to why he was chosen and who is behind the "God account." Along with his friend Rakesh Singh (Suraj Sharma), and joined by Cara (Violett Beane), they begin to find people and help them, changing their lives and that of the three of them including Miles reconciling with his father Arthur (Joe Morton), the long-time reverend of Harlem Episcopal church.

God Friended Me is an American Dramedy series that premiered on CBS on September 30, 2018. On January 29, 2019, CBS renewed the series for a second season. The show was canceled on April 14, 2020. The finale aired on the 26th of the same month.

God Friended Me provides examples of: