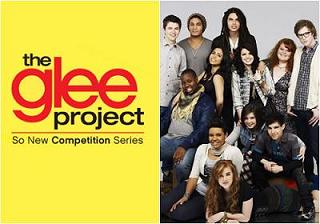 The Glee Project is a Reality Show that is sort of a spin-off of Glee. It's a talent competitionnote or as Robert Ulrich has stated, an "inspiration" competition for a 7 episode guest role on Glee. The episodes involve weekly themes for which the contestants get homework. They bring in one of the stars of Glee to judge the contestants as they perform the homework challenge and choose a winner. The winner gets an advantage in the week's music video, directed by Erik White. The three who do the worst that week do a "last chance performance" for Glee's Show Runner Ryan Murphy, choreographer Zach Woodlee, casting director Robert Ulrich, and (in season 2) vocal coach Nikki Anders.

Began its second (and final) season in June 2012, two weeks after the finale of Glee's third season.

Reality tropes at work include: