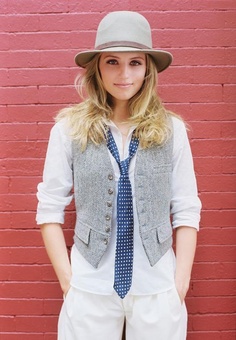 Dianna Agron, but you can call her Charlie.
"I feel as if I go to Africa, I may never come back. I'm just going to live with the animals and adopt an elephant, and it's going to be my friend."
Advertisement:

Dianna Elise Agron is an actress, writer, singer, dancer and model who was born on the 30th of April 1986 in Savannah, Georgia. You probably know her from FOX's Glee or The Family because, let's face it, you forgot about I Am Number Four. She won the "Breakthrough Newcomer" award in 2010, she's that good.

Interestingly, she sold her first screenplay six months before being cast on Glee - which was the day before principal photography - but they didn't make it within a year so she has the rights back. This love of writing was evident on her tumblr blog [felldowntherabbithole] and now with YM&C (You, Me & Charlie

). According to Vanity Fair, YM&C is "full of sunshine, optimism, and pretty people".

On the Glee Live Tour in 2011 she famously came out wearing a T-shirt saying "Likes Girls" in the same style as Chris Colfer's "Likes Boys" one for "Born This Way". Given the Les Yay afforded her character (and herself sometimes) lots of people drew conclusions and so the next day she took to her blog and wrote out a three-and-a-half thousand word essay asserting she's not gay, Not That There's Anything Wrong with Thatnote She is, truly, a powerfully active advocate for LGBTQ rights.

Her favorite animals are elephants. She wrote, produced, directed and starred in the 2009 short A Fuchsia Elephant.

Agron made her West End and professional theatre début performing in McQUEEN, a Dark Fantasy based on a fictional story imagined by fashion designer Alexander McQueen shortly before his suicide, as lead female Dahlia in May 2015.