Spoilers for Ralph Breaks the Internet will remain tagged. However, being a sequel to Wreck-It Ralph, this page does contain unmarked spoilers for that film. You Have Been Warned! 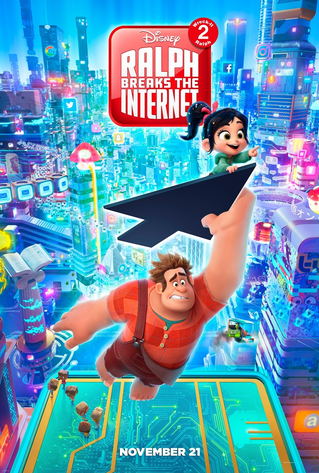 A new connection will change the world.
Vanellope: We are going to the Internet!
Ralph: Super excited. There's one minor thing: what is the Internet?
Advertisement:

Ralph Breaks the Internet is the 57th entry in the Disney Animated Canon, and its fifth sequelnote Preceded by The Three Caballeros, The Rescuers Down Under, Fantasia 2000 and Winnie the Pooh. The sequel to 2012's Wreck-It Ralph, it premiered on November 21, 2018.

Taking place six years after the events of the first film, Ralph and Vanellope have become best friends and spend every evening in the arcade together. However, Vanellope begins to express boredom with Sugar Rush. As she knows every turn, every corner, and every stretch of the game, it's become too predictable for her. Ralph attempts to cheer Vanellope up by making her a new track, but a fight for control between Vanellope and a player results in the Sugar Rush console breaking and getting unplugged. To save Vanellope's home, she and Ralph venture into the Internet via the arcade's new wi-fi router in hopes of finding the steering wheel needed to fix the console. After having so much fun taking part in an online racing game, Vanellope starts to have doubts about returning to Sugar Rush.

Disney princesses test whether Vanelope is a true princess by asking which of their absurd tropes she fits into.

Disney princesses test whether Vanelope is a true princess by asking which of their absurd tropes she fits into.