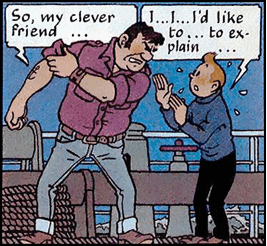 "HEY, FRANK! Whaddaya say when your mom catches you in your room with a jar of peanut butter and the family dog?"
— Audience member at The Rocky Horror Picture Show
Advertisement:

A character with a guilty conscience reacts to the appearance of an authority figure with a cry of "Wait! I can explain!" and launches into an explanation of how whatever-it-was wasn't their fault.

Often, it turns out that the authority figure really wanted to talk to them about something else or is objecting to some minor unrelated infraction, and wouldn't even have known about whatever-it-was if they hadn't tried to explain.

The next step in the evolution of this trope is also common: a parent will confront their kid in a vague way, and the kid will confess to whatever he or she has done. The parent either knew the kid was up to something, but had little idea of what the specifics were; or, the parent was just making a routine surprise inspection.

Alternately, a phrase spoken by someone whose masquerade's about to be blown who's about to make with some quick Clark Kenting to protect the secret.

A Discredited Trope as the line is rarely played straight nowadays. And considering the number of times it's been parodied/subverted, it's well on its way to being a Dead Horse Trope. As such, a common subversion is for the character in question to deliver this line... then resignedly admit that no, actually they can't explain it.

Often caused by the situation being Not What It Looks Like. See also the cousin trope Noodle Incident.