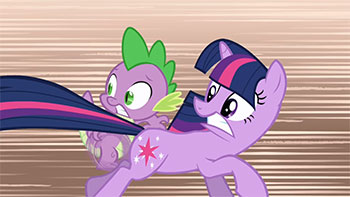 Twilight Sparkle receives two tickets from Princess Celestia to Canterlot's Grand Galloping Gala, Equestria's biggest social event. Unfortunately all five of her new friends want to go: Applejack wants to drum up business for her family's apple farm so she can afford to fix up a few things around the homestead; Rainbow Dash wants to go so she can show off for the Wonderbolts, a troupe of acrobatic fliers who are scheduled to perform at the Gala; Pinkie Pie is the sort of party animal who would jump at a chance to go to "the most amazing, incredible, tremendous, super-fun, wonderful, terrifically humongous party in all of Equestria!"; Rarity dreams of meeting her true love at the Gala à la Cinderella; and Fluttershy wants to see the royal gardens in Canterlot and all the exotic birds and animals kept there.

With all five of her friends arguing over who gets the ticket, Twilight can't bring herself to disappoint any of them by choosing one as her guest. Unable to think straight on an empty stomach, Twilight's efforts to get lunch are further interrupted by her friends trying to butter her up for the ticket: Rainbow Dash makes a hole in a rain storm so Twilight doesn't get rained on, Rarity offers to give Twilight a makeover, Applejack plies Twilight with home-baked goods (which Twilight, even as hungry as she is, finds herself unable to accept in good conscience), Fluttershy and her animal friends straighten up the library and Pinkie throws a party in Twilight's honor. When word gets out that Twilight has an extra ticket to the Grand Galloping Gala, Hilarity Ensues (as does a big chase scene) with Twilight forced to flee from a mob of ponies trying to bribe her into taking them along.

Twilight escapes the mob, only for her friends to confront her one last time. Twilight finally gives up and admits she can't choose who to take along because she doesn't want any of her friends to feel left out. Feeling guilty, her friends all give up their claim for the extra ticket and Twilight has the tickets sent back to Princess Celestia with a note of explanation. She's pleasantly surprised when Celestia responds with a letter reading "Why didn't you just say so in the first place?" and extra tickets for her and all her friends. There's even one for Spike, who's pleased as punch despite his earlier claims that he wasn't interested in "any of that Girly Gala Gunk". As a way of apologizing, the other ponies decide to satisfy Twilight's growling tummy by taking her out to dinner.