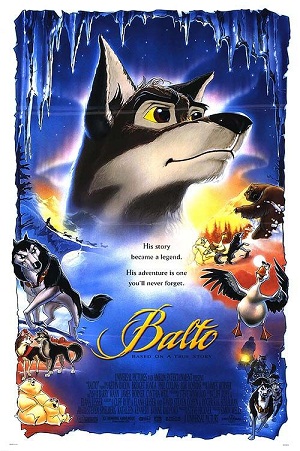 "Not a dog. Not a wolf. All he knows is what he's not."
"A dog cannot make this journey alone... but maybe a wolf can."
— Boris
Advertisement:

Balto is a 1995 animated movie produced by Steven Spielberg, based loosely on the 1925 serum run to Nome

. It was the third and final feature produced by Spielberg's animation studio, Amblimation.

The plot involves a large amount of children, who are sick in Nome, Alaska. The only way to get medicine is through a team of sled dogs. When the capable but completely self-absorbed lead dog, Steele (voiced by Jim Cummings), gets his team lost, saving the town falls on the shoulders (so to speak) of a wolf-dog hybrid named Balto (voiced by Kevin Bacon). He's accompanied by a Russian goose named Boris (voiced by Bob Hoskins), a female Husky named Jenna (voiced by Bridget Fonda), and two hydrophobic polar bears named Luk and Muk (voiced by Phil Collins).