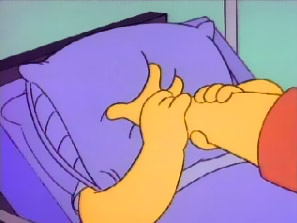 Vaya con Dios, amigo.
"I can see you don't want to talk about this, Mr. Crawley," I said, "and that you're about to try to fabricate. So, before you say anything, you should know that, if I sense you're lying, or even being incomplete, I'm going to pull that pillow out from under your head and smother you with it. Take a moment and imagine what that'll be like." I smiled as though I had just wished him a nice day.
— John Rain, Winner Take All
Advertisement:

When you want someone to go to sleep for a really, really long time, all you need is a nice soft pillow.

Fiction, especially in visual media, has a hard time conveying the idea of deadly force. While Boom, Headshot! is a pretty clear indication that Bob isn't getting up again, Rule of Perception means that a character without obvious lethal injuries may not seem 'dead' to the audience. This is why suffocation and strangulation — the amount of time it takes to kill someone by cutting off her oxygen and the chance she can be revived afterward — are treated so inconsistently. A minor character might die in seconds but another can be choked until they go limp and (especially if they're a major character) wake up perfectly fine. Bob may fall into water, thrash and splash for a bit, and then go under for good, while Alice can lie at the bottom of a pool for an hour and still be revived by a Kiss of Life.

So it's tropable that quick and certain death by suffocation is available through nothing more than a standard pillow — press one to your victim's face and they will struggle a few seconds, squirm a few seconds more, and then expire. Once dead, they are dead for real, with no chance of revival.

While there is some justification for this (characters murdered by pillow are often weakened, sick, or injured), this trope employs considerable artistic license. An ordinary pillow is quite porous and will allow some air to get through, so even if it were pressed as tightly against the victim's nose and mouth as possible (despite struggling and all), it will still kill much more slowly than other methods which entirely cut off the victim's air supply.

Unmarked spoilers abound, this trope being about a "foolproof" method of inflicting nigh-instantaneous death and all. Watch yourself.

Often combined with Sickbed Slaying. Compare Instant Sedation and Instant Death Bullet for similar examples of the unrealistically quick dispatch of a human being. Occasionally overlaps with Sinister Suffocation and even Mercy Kill.