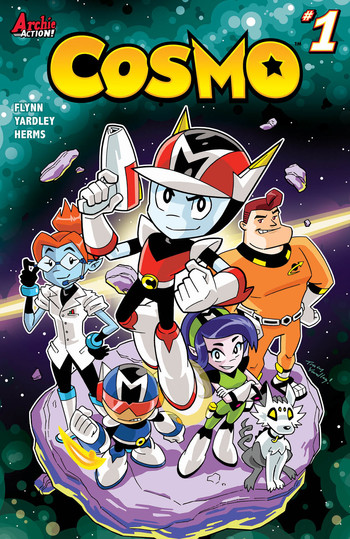 Back in the 1950's, during the heady early days of The Space Race, Archie Comics came up with Cosmo the Merry Martian. The guy only had 7 issues that would later get serialized, but would gain some recognition after longtime Archie artist Fernando Ruiz kept sticking him in little cameos. Cosmo is a 2018 reboot of the Cosmo the Merry Martian miniseries by Ian Flynn and Tracy Yardley (whose work you might be familiar with).

An Earthling astronaut, the courageous Captain Max Strongjaw, is left adrift in the empty wastes between Earth and Mars after his ship's power fails; his life is saved when a passing Martian captain (the titular Cosmo) and his crew of explorers, en route to investigate a Distress Call from Earth's moon, bring the stranded ship aboard their own, much larger vessel. Cosmo wins over Max's initial distrust and paranoia, and Max agrees to accompany them on their rescue mission in return for a safe passage home — but the Earthling quickly finds himself in over his head in a galaxy full of mad science, lunar zombies, and Venusian battle princesses...