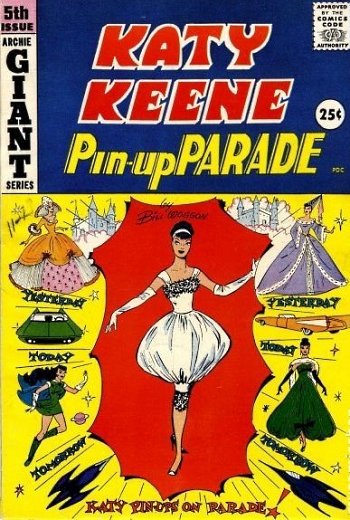 A fashion-heavy comic. The titular protagonist first appeared in Wilbur #5 (Summer, 1945). Wilbur was one of several anthology titles in the Archie Comics line of The '40s. She also spent a few years as a back up feature in Suzie Comics. Katy eventually got her own comic in 1949, with some spinoff series devoted to even more costumes. These series were eventually cancelled in The '60s, but got a revival for a few years in The '80s, before another short revival in the mid 2000s.

The plot initially centered around Katy and her unnamed sister going to Hollywood to get into acting, and then she gets involved in the fashion industry, as well as getting involved in several relationships. The plot was tweaked in both revivals.

Created by Bill Woggon, although this wasn't the only fashion-heavy comic, it did gain a strong fanbase, especially by having fans submit costumes, and the artist adapting them to the comics. Katy also had an officially sanctioned fanzine in The '70s, where one of the fans was future Promoted Fanboy John S. Lucas, who would eventually be brought on as one of the main artists for work relating to Katy.

In January 2019, a Live-Action Adaptation of the comic was announced to be in development. The second spinoff of Riverdale following Chilling Adventures of Sabrina, Katy Keene was a musical comedy set in New York City a few years after Riverdale. Lucy Hale stars as Katy, and the main cast also includes Gloria Grandbilt, Ginger Lopez from the mainline Archie series, the Cabot twins from Josie and the Pussycats, and Ashleigh Murray's Josie McCoy, introduced in the parent show. It aired for one season in 2020 before being cancelled, due to a combination of low ratings and the impact of COVID-19.

Millie the Model is a similar comic, and the two characters even debuted the same year. Compare also the original Patsy Walker series.

This comic provides examples Of: