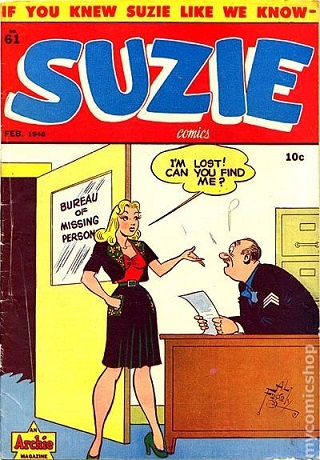 "If you knew Suzie like WE know Suzie"
Advertisement:

Suzie, the eponymous heroine of Suzie Comics, began life in Top-Notch Laugh Comics #28 (July 1942), one of several anthology titles in the Archie Comics line of The '40s. She gradually took over the comic until it was re-named after her in issue #49. She also appeared in Pep Comics with the Riverdale gang proper though her stories don't seem to have been set in quite the same continuity.

Suzie was a young woman, sweet natured and very pretty but not overburdened with brains and a total klutz. She was forever in search of a job she could keep, and usually managed to get fired from whatever job she took through ineptness or bad luck (or more usually both) by the end of the story.

Initially Suzie was depicted as living alone and implied to be an adult in her early 20s but in her own title she was retooled into a teenager having recently graduated high school and still living at home. Amongst the suitors she acquired in the new setup was a gangly young man named Ferdie, who was at least her equal in clumsiness and, depending on the issue, acted as either the Betty in a Betty and Veronica setup (with Suzie as the Archie and some rich, good-looking suitor as the Veronica), a platonic friend or, in later issues, an out and out boyfriend. Ferdie quickly began to grow in importance getting side strips of his own and increasingly the focus of the comic began to shift toward him. By the end of the original run with Suzie Comics #100, he was arguably the real star with Suzie more of a supporting character in her own book reduced to the status of the love interest and, bizarrely enough, the Straight Man.

For much of the comic's run, Katy Keene was the backup feature.

After the end of her comic run, Suzie remained in comic book limbo for decades until being revived (with a host of other near forgotten Archie Comics characters) for an Intercontinuity Crossover in a two-part Archie and Friends story in 2009 (which saw Archie flirt with her and Veronica give her a makeover.) Since then digital reprints of her comics have been published by Archie Comics along with a 60-page Digital Exclusive collection in September 2013 which suggests her story isn't quite over yet.