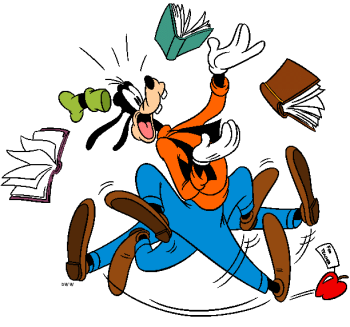 He's also known for being dimwitted.
Reggie Mantle: What did the klutz do this time?
Veronica Lodge: He somehow walked into my locker door.
— Archie Comics
Advertisement:

This is a character that everyone knows and loves. So long as they aren't involved in their plans, anyway. The Klutz bumbles, stumbles and fumbles at seemingly anything they do, but they are kept around for one reason or another. The unstated reason is that they make a great Plucky Comic Relief or a perfect mixture with The Ditz when making comical blunders because of their funnily clumsy nature, and serve as a humanizing accessory to a hero if he/she is The Stoic.

There are varying degrees of klutziness, of course. Some characters are fairly capable with a notable tendency to trip, drop things, forget important tasks, or just plain hurt themselves with their reckless use of explosives, while others can effectively be a force of raw chaos, inducing Deus ex Machina levels of disaster that can foil even the best-laid plan. When their klutz-aura is potent enough to leave smoking wreckage and screaming victims in their usually oblivious wake, they ascend to Lethal Klutz status.

A broader supertrope covering those characters that cannot be fit into the narrower Cute Clumsy Girl/Dojikko, which combines with Ms. Fanservice, The Ditz, and The Woobie specifically to transform the character into a Moe factory. Klutziness may be the bunny ears on the Bunny-Ears Lawyer, where their clumsiness is forgiven when they possess valuable knowledge or work skills where their utter lack of grace is not such an impediment. May occasionally transform into The Millstone or Spanner in the Works, depending on how well the heroes can point the klutz at their enemy's plans, and away from their own. If the klutz is routinely The Millstone, the audience may be compelled to yell "Just Eat Gilligan!"

Often used as an excuse to inject The Pratfall and other elements of Slapstick comedy. Interestingly, they may actually be Graceful in Their Element— it's just not land.

Luigi trips over while running

While he was shown to be typically clumsy in previous games, in the Simon Belmont Reveal Trailer however, he was still the lovable coward we all know who was never given a break, this moment in particular showcases his true clumsiness more than before.

Luigi trips over while running

While he was shown to be typically clumsy in previous games, in the Simon Belmont Reveal Trailer however, he was still the lovable coward we all know who was never given a break, this moment in particular showcases his true clumsiness more than before.