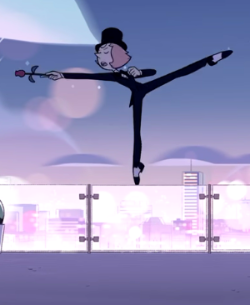 Yes, she's on a glass railing. On an outdoor balcony. On the top floor of a hotel.
"But I say: let a ploughman plough, but choose an otter for swimming, and for running light over grass and leaf, or over snow—an Elf."
— Legolas, The Fellowship of the Ring
Advertisement:

This character stands out for being physically graceful, agile, and light on their feet. Sometimes it seems like they could take off into the air at a moment's notice, and indeed, these characters are frequently associated with Flight or air elemental powers. As they walk, these characters could be prone to perching on things like trees or walking along narrow fences to show off their agility. Some might elevate this to supernatural levels by gliding over surfaces that shouldn't be able to support them at all.

A sister trope to the Lightfooted is the Noiseless Walker. Contrast The Klutz, The Big Guy, and people who move With Catlike Tread.

The Lightfooted is often a Fragile Speedster, although speed isn't necessary to qualify. See also the Phantom Thief, who usually has to be silent and quick in order to be successful. May overlap with the Dance Battler and forms of Waif-Fu. See also Combat Parkour.