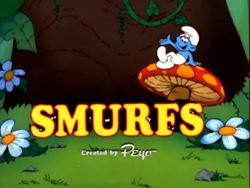 We'll have a smurfin' good time! Or something like that...
The period from 1966 to 1990 was considered the "Golden Age of Saturday Morning Cartoon" where all television networks — by all, we mean three: NBC, ABC and CBS — made conscious decisions devoting their weekend blocks to showing animated programs targeted for children during the mornings. Though as time went on, live-action kids' shows as well as other family-friendly media began taking over the airwaves, meaning ratings started to go down and the future of established Saturday morning cartoons became uncertain. Eventually, animated studios and network programmers fell into a pattern of reusing popular formulas, some taking characters from their most popular shows and pairing them together in order to make them "perform" or "compete" much like how their live-action counterparts in Sitcoms and Soap Operas did on Prime Time shows.
Advertisement:

In 1979, television executive and producer Fred Silverman turned President and CEO of NBC brought his daughter a plush Smurf doll from a local toy shop during a network trip to Aspen, Colorado. Upon his return, Silverman contacted cofounder Joseph Barbera of Hanna-Barbera Productions, charging him on acquiring the rights to the Smurfs, guaranteeing the studio an on-air commitment if they could make an animated cartoon series around the Belgian comics. Doing as he was told, Barbera began a two-year trip to the television screen, veering the Smurfs far from Pierre "Peyo" Culliford's 1958 creation before coming back to a familiar form.

Even though the contract Peyo had with NBC, S.E.P.P. (La Société d'Edition, de Presse et de Publicité) and Hanna-Barbera Productions gave him the power to veto any changes made to his creation, Hanna-Barbera had to make changes to the comics before making them into episodes. They included changing 'The Black Smurfs' from "Les Schtroumpfs noirs" to purple as well as changing the 'Swoofs', which are basically the Smurfs in disguise to green from the reddish orange skin tone from "Le Cosmoschtroumpf" ("The Astrosmurf"). Hanna-Barbera also changed Brainy from being whacked on the head with a blunt object as punishment in the printed stories to being physically thrown out of the Smurf Village in the cartoon, which was later carried into the 2011 movie and the 2020s cartoon series, in fear of young viewers hitting those they despise on the head.

The Smurfs animated series finally debuted on Saturday morning of September 12, 1981, capturing forty two percent of the audience, thus making it the most highly rated children's program in more than eight years, not to mention the highest rated program on NBC in roughly two decades. Smurfs even outperformed a number of successful prime time shows in terms of viewing percentages. In terms of voices, Don Messick, Frank Welker, June Foray, Paul Winchell, Michael Bell, Alan Young, Hamilton Camp, and Charlie Adler, among others provided their vocal talents to the show.

While many of Peyo's original Smurfs comics such as "L'Apprenti Schtroumpf" ("The Smurf Apprentice"), "Les Schtroumpfs et le Cracoucass" ("The Smurfs and the Howlibird") and "Le Schtroumpfissme" ("King Smurf") were adapted for the first season, Hanna-Barbera reached a point where new characters need to be introduced as well as creating original stories for the series. Johan and Pirlouit, called Peewit in English, made their television debut in the second season, becoming recurring characters as well as Bigmouth, who only made one appearance in the comics. Gargamel, Azrael, Princess Savina, the King, Dame Barbra and Homnibus made their animated appearances from the comics as well. Other allies of the Smurfs created specifically for the animated series include Prince-turned-King Gerard, the Pussywillow Pixies, Gourdy, Marina, Selwyn and Tallulah just to name a few. Besides additional allies, supplementary antagonists such as Chlorhydris, Gargamel's godfather Lord Balthazar as well as Scruple, Gargamel's apprentice starting from around season six appeared as adversaries to the Smurfs.

Despite the Smurfs being cancelled by NBC, which was getting rid of its animated Saturday morning lineup to allow for more news programming, Hanna-Barbera would animate the characters one last time in a drug abuse prevention special with other popular Saturday morning showsnote  Alf from ALF: The Animated Series; Garfield from Garfield and Friends; The Chipmunks, Alvin, Simon & Theodore Seville, from Alvin and the Chipmunks; Baby Kermit, Baby Piggy & Baby Gonzo from Muppet Babies; Slimer from The Real Ghostbusters; Pooh Bear & Tigger from The New Adventures of Winnie the Pooh; Bugs Bunny & Daffy Duck, not to mention Wile E. Coyote's mentioned and his time machine's used, from Looney Tunes; Huey, Dewey and Louie from DuckTales and Michelangelo from Teenage Mutant Ninja Turtles called Cartoon All-Stars to the Rescue. A handful of Smurfs, along with Papa, Hefty and Brainy, with a quick cameo from Harmony in the comic book lying on the floor, appeared in a limited amount of appearance under the orders of Smurfs' creator Pierre "Peyo" Culliford.

In 2017, a new Smurfs animated TV series was being developed

. It premiered on OUFtivi in French-speaking Belgium on Sunday, April 18, 2021. The show later premiered in the US on September 10, 2021 on Nickelodeon.