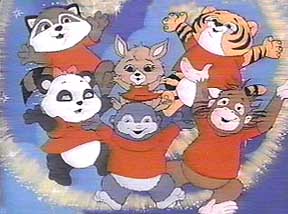 An early 1980s Animated Series by Hanna-Barbera, based on a group of animal characters from Hallmark greeting cards. In the Shirt Tales cartoon, the animal heroes had their base of operations in an old oak tree in the aptly named Oak Tree Park. The title came from the fact the message on their shirts changed constantly - usually reflecting what they were thinking or feeling at the moment.