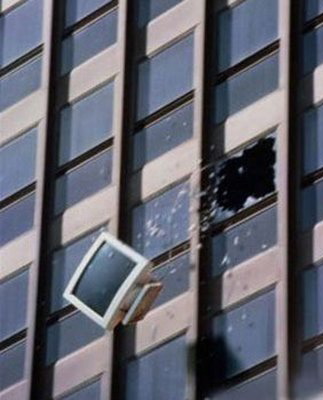 That'll teach you to ruin my life!
"If ever you're not satisfied with one of our tires, please feel free to bring it back.
[old woman throws tire through window]
Thank you."
— Discount Tire Co. commercial

A Comedy Trope. There are few visual images that better convey a character's explosive anger with an alarm clock, videogame, phone call or TV set than said character hurling said object through a closed window. Crash!

Said action is most always viewed from the outside, only indirectly showing the violent pitch or punt that launches the object. It's funnier that way, especially if the appliance is illogically heavy. (See Offscreen Crash.)

While it usually applies to household appliances, other objects can also be featured, as long as someone is propelling them through the window.

Doesn't count if the character's main intention was to break the window; the focus of the destruction must be on the object.

Keep in note that throwing broken appliances like TV, video game consoles, laptops, etc out of the window in Real Life may cause injury or death to bystanders and pedestrians or damage vehicles below (along with broken shards of glass that follow); and the thrower of said appliance may be held legally accountable for any injuries and damages because of said thrown appliance. So Don't Try This at Home if you have a broken appliance.

Can be a form of Percussive Therapy and/or Percussive Shutdown in some cases.

In a memetic scene from "The Trial of Leslie Knope", upon realizing that his own private information can be obtained by the internet through the use of "cookies", Ron Swanson proceeds to throw his computer in a dumpster.

Alternative Title(s): Rage Against The Appliance

In a memetic scene from "The Trial of Leslie Knope", upon realizing that his own private information can be obtained by the internet through the use of "cookies", Ron Swanson proceeds to throw his computer in a dumpster.