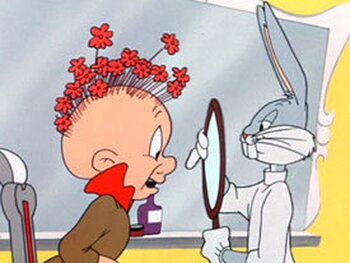 "M is for Minoxidil,
A hair-raising drug;
Takes a year to grow fuzz—
Give it up! Buy a rug!"
— MAD, "The ABC's of Drugs"
Advertisement:

It seems that a man's greatest fear is losing his virility...er, hair, and once it's gone, it's gone for good. Which is why a bald character is bound to try using some kind of product that promises to grow back their hair. This product never works. Or rather, it usually works too well, with way more hair sprouting than necessary, and often in places that it wasn't wanted. Other side effects may occur as well, including, but not limited to, the hair turning an unnatural color or what little hair was left falling out completely.

Truth in Television: most over the counter baldness remedies don't work or don't work well, especially when used once the condition is sufficiently advanced. Prescription systemic treatments are somewhat more likely to work (though they also come with bad side effects for men — namely, they work by reducing testosterone and/or its effects on the body in most cases). The gold standard of baldness treatment is hair transplant with ongoing maintenance, as it is the most likely to actually be worth the money spent on it with the least systemic side effects.