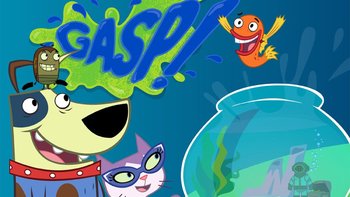 Gasp! is an 2010 Australian animated series produced by The ABC in association with SLR Productions.

Laughs, Lunacy and Logic - wait, scratch that last part - conspire in this situation comedy series about a larger-than-life little goldfish named Gasp, whose imagination is as big as his heart. This series follows the zany antics of a goldfish and his family-pet 'cousins' left home alone when Mum, Dad and their two kids, Ginger and Fred, have gone off to work, school or play. Ever wondered what pets get up to when there are no humans around to spoil the fun? This is the place to find out. From all-pet singing/dancing revues to Arctic expeditions through the freezer, anything can happen in this house — and usually does.