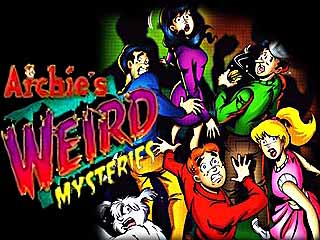 Things are getting weird in Riverdale!
"What happened to the good old days, when Jughead was the only weirdo in town?"
— Veronica Lodge
Advertisement:

Archie's Weird Mysteries is an animated adaptation of the Archie comic book, produced by DiC Entertainment and Les Studios Tex. The series ran for forty episodes from October 1999 to February 2000, and unlike the usual, mundane Slice of Life stories that the cast is known for having, the show goes in a more supernatural direction. Thanks to a failed science experiment done in the Riverdale High physics lab, the town has become a huge Weirdness Magnet for a host of monsters, ghosts and other paranormal or extraterrestrial activity. Which is all fine by Archie, who happily hunts down and reports on all these strange anomalies for the school newspaper, while his friends find themselves equally involved in the madness, whether they want to be or not. While the show would occasionally delve into some dark territory, its tone would never go much further than the likes of other lighthearted Horror Comedy programming like Goosebumps, with episodes deliberately involving a schlock B-Movie atmosphere.

In 2002, an animated movie called The Archies in Jugman was released. Featuring the gang having to deal with a frozen caveman who gets thawed out and has an uncanny resemblance to Jughead, the film has most of this show's cast and crew return to reprise their roles.

The entire series is available on DVD

Can be found on the streaming service Pluto TV in rotation on the Afternoon Kids channel. It's likewise on Tubi as well.

Is now available for streaming alongside The New Archies on Paramount+.