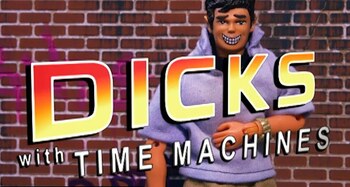 Time Travel can be pretty scary, especially if you don't know the rules. Whether one has access to a Time Machine or someone who can naturally travel through time, the personal stakes are about as high as they can get, with erasure from existence being the grand prize. No matter the method of transport, it behooves all time travelers to be as careful as humanly possible to avoid irreparable damage to both personal history and the time-stream at large.

Too bad the Time-Traveling Jerkass didn't get the memo.

The lowest form of a Conqueror from the Future, the pettiest kind of Time Master, a Non-Linear Character with teeth, the TTJ's main M.O. is just to enjoy the ride regardless of what it might do to the past, present, or future. If time is totally flexible, it means any form of bad behavior can be erased, which means someone with the means to traverse time can indulge themselves to the fullest without ever having to face up to anything. Why worry about tomorrow when you can live for today every day?

If the traveler in question doesn't care for the usual supervillain accoutrements, this usually means just messing with people without their knowledge or using their power to relive the best moments in history over and over. But it can get pretty hairy if things are pushed to a breaking point, especially if overuse of time travel can result in a Time Crash.

Will usually result in the traveler trying to Make Wrong What Once Went Right, or in some other cases the generic Time-Freeze Trolling Spree. Will definitely run afoul of the Time Police if they haven't Ret Goned them yet. Will probably not work in a setting where You Already Changed the Past.