Recap / Star Trek: The Next Generation S5E9 "A Matter of Time" 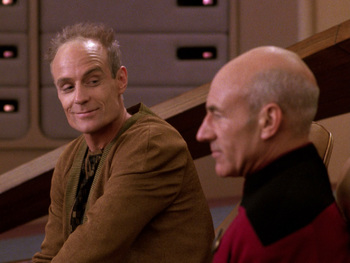 The One Where Max Headroom trolls Picard.

On Penthara IV, an asteroid has struck an unpopulated continent, a catastrophe which has thrown a heavy mass of dust into the atmosphere, threatening to create an impact winter. La Forge and Data are hard at work in Engineering coming up with a plan to save the inhabitants, but on the bridge, Worf notices a temporal distortion, and traces it to a small, curiously-designed ship, approximately five meters in length. They receive a message that only says, "Move over." Captain Picard proclaims that the Enterprise isn't going anywhere, but their visitor meant Picard himself — as soon as Picard steps aside, a lanky gentleman beams onto the bridge right where Picard was standing and introduces himself as Professor Berlinghoff Rasmussen (Matt Frewer), a historian from 26th-century Earth.

Rasmussen immediately begins treating the ship like a museum, leering at everything with comments about how certain aspects of the ship look in "history books." The crew, of course, are in disbelief as to why this guy chose now, of all times, to show up on the Enterprise, but Rasmussen invokes the Temporal Prime Directive every time they inquire about the future. He does, however, imply that he's here to witness an interesting piece of history. A scan of the timeship's hull reveals "some kind of plasticized tritanium mesh," a material not on record and impossible to scan through, which is evidently enough to convince Picard of his credentials. Rasmussen asks the crew to complete some questionnaires he's prepared for them, and Data then shows him to his quarters, where Rasmussen treats him like an indentured servant. (Geez, at least Dr. Pulaski actually had a proper dialogue with him!)

As expected, Penthara IV proves to be in pretty bad shape upon the Enterprise's arrival. As Picard speaks with Dr. Moseley on the planet about how to use Federation technology to help, Rasmussen goes to Ten-Forward (sadly, Guinan does not appear in this episode) and Engineering, and delivers to the crew, as promised, his questionnaires. Attempts to get him to open up a bit are met with Rasmussen condescending to them, and talking too cryptically and vaguely to get anything out of him. On the other hand, he certainly has an awful lot of questions for them, and has taken to pocketing random pieces of equipment from around the ship.

The crew are hard at work using phasers to drill into Penthara IV to release carbon dioxide, increasing the greenhouse effect to warm the planet. So far, so good, though there's still the issue of their guest lumbering around with that big smirk at everything they do. Troi, having sensed all episode that their guest is trying to confuse them, makes no secret of her disdain and tells him she doesn't trust him. No sweat off his back, as he then proceeds to hit on Dr. Crusher outside of Sickbay (and none too subtly at that). Beverly doesn't mess around with pick-up artists, so she puts him in his place:

While Riker and Picard are on the bridge discussing what in the blue hell the professor's questions are about, earthquakes and volcanic eruptions devastate Penthara IV. Seems their phaser idea didn't work like they'd hoped, and instead they dramatically increased seismic activity, worsening the ash cover. La Forge and Data figure they can ionize the upper atmosphere with their deflector beam and a modified phaser blast, which will somehow clear the air, but, as Data relays to Picard, they have to do this maneuver precisely or risk burning off the entire atmosphere from the planet.

Picard, with little alternative, decides to consult a source he's never really had before — one Berlinghoff Rasmussen. He explains the plan, and points out that Rasmussen knows the outcome of this plan. Picard points out that asking for a time-traveller's perspective — namely, whether this plan succeeds or not — is not something he would normally do, since Picard is pretty by-the-book. However, he now has "twenty million reasons to do so." This turns into a heated debate, in which Rasmussen hesitates to offer any information and even tries to invoke Hitler's Time Travel Exemption Act. Picard finds himself flummoxed that Rasmussen, faced with the chance to do the right thing and possibly save twenty million people, callously refuses to budge on his beliefs, simply because the entire sector, Rasmussen's past, could completely change.

Back to square one, Picard goes out to the bridge and decides to go for it, and Dr. Moseley on the surface agrees to make the attempt, though as La Forge points out, they only have one shot at this. The Enterprise fires their deflector dish, and after a few tense moments, successfully returns Penthara IV to its original climate. Rasmussen seems satisfied having seen this unfold, and then announces he's off to pack and leave the ship, though not before a few more smug comments. By this point, the crew have heard more than enough from this guy.

Rasmussen is tickled to see the crew lining his timeship to see him off, until Picard reveals that they're really there to inspect the timeship. Before he can invoke the Temporal Prime Directive again, Picard points out that valuable tools are missing from various corners of the ship. Rasmussen responds by asking Data to make the inspection, since an android can absolutely be trusted to not reveal any details of the future they'd glimpse while inside. Data agrees, and with an identifying handprint, Data steps inside with Rasmussen, only to find that the missing items are indeed laid out all over his dashboard. Data turns around to find he's being held at phaser-point, and then we get The Reveal — Rasmussen isn't a historian, and that's not even his ship. A real 26th-century historian had the misfortune of traveling back to the 22nd century and being mugged by Rasmussen, a struggling inventor, who plans to "invent" one piece of the stolen equipment a year. And to his delight, he now gets to make off with Data as well. With the ship's auto-timer set to transport them back to 22nd-century New Jersey in two minutes, he prepares to stun Data, only to find his phaser has been deactivated. Uh oh.

Data takes Rasmussen back outside, and reveals the whole plot. Picard immediately points out the hypocrisy of all his secrecy, and reveals that with the door to the ship open, they were able to scan inside and remotely deactivate all the weaponry. Rasmussen tries desperately to get back inside his ship, even pleading to Crusher, who is decidedly unmoved by his plight. It's too late for Rasmussen, whose ship disappears, stranding him in the future forever. Picard points out to Rasmussen that some real historians at Starfleet might have a lot of question for a human from the 22nd century, and he is rather looking forward to turning him over to them. The episode ends with Worf hauling away a horrified Rasmussen, as Picard welcomes him to the 24th century.