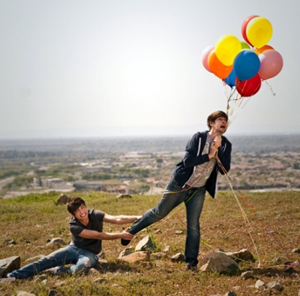 "If I wasn't there this day, Ian would have flown away into space. And he would be dead."
"Mmm, oh yeah, that's a very good TV Tropes description-" — SHUT UP!
Advertisement:

The duo began working together in the early 2000s with Flash animations on sites like Newgrounds and the Smosh.com website. They moved to YouTube in the fall of 2005, and became popular for their theme song lipsyncs; their Pokémon theme song lipsync was once the most-viewed video on YouTube before a copyright takedown.

Works on Smosh with their own pages:

Works on Smosh that need their own pages: