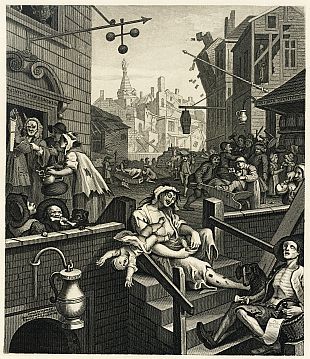 Gin Lane: Not a good place for a holiday.
"Mos Eisley Spaceport. You will never find a more wretched hive of scum and villainy. We must be cautious."
— Obi-Wan Kenobi, Star Wars Episode IV: A New Hope (Trope Namer)
Advertisement:

Take the worst, grimmest and darkest side of society, give them a place where all their sins are given free roam to be expressed, collect it into a system that can just barely sustain itself and you get the Wretched Hive.

It will be a mostly lawless setting, usually (over) populated by criminals. There may be no actual government in this Wild West or Scavenger World because it is miles or light years away from civilization, and if there is it's probably a Dystopia that's corrupt, incompetent, obstructive or perhaps just uncaring enough to not bother to spread its reach to all corners of society. If this hive has any truly good authorities, expect them to be extremely overworked, incapable of controlling the skyrocketing crime everywhere, or just too idealistic to survive. An alternative is to have it as a gang-like system ruled by a mob boss, Big Bad or Evil Overlord who allows evil, but only to a certain standard. It could be truly lawless with no authority other than the big stick you carry with you.

In many cases, the economy is no better. If this is true, facilities are usually falling apart, and the subways and buses are often full of crooks and junkies. And they're always late. Any schools in this place will almost inevitably be impoverished or sadistic. The roads may be cracked and broken, with a Trashcan Bonfire every fifty feet or so. Many buildings have been abandoned, to be occupied by vermin, hobos, or criminals. Decent jobs are few and far between. Housing (if you can get it) is unsafe, filthy, and overcrowded. In short, poverty is the norm, not the exception.

However, prosperous and affluent settings can also qualify as this trope. While people are more likely to be in decent financial shape, don't expect things to be any better in terms of morality. At most, there's a pleasant façade to conceal the rot within. Sleazy, immoral decadence is frequently rife, and may not even be particularly hidden—if it is at all. Non-impoverished examples are arguably worse, ethically and morally speaking, since the inhabitants don't have deprivation as an explanation for the things they do.

This lawless setting is often wonderful for allowing all varieties of creativity, ideas and/or tropes to flow in, be played and interact in interesting ways, and many plot conveniences that the protagonists need to get away with doing active work rather than just handing problems over to the police or running into Fridge Logic when they don't get arrested for taking the law into their own hands, while there are several takes on all sorts of unlawful or devious acts. Gangs, cons, gambling, underground fighting, rampant prostitution, a thriving black market (ranging from one guy with some watches under his coat to a literal market), jaywalking and many more. This can be portrayed as anything from guilty fun or the inevitable underbelly of humanity to constant danger. The heroes can always find some misdeed around them to solve and the villains will have little problem finding a safe hideout or Bad-Guy Bar to get together and plot schemes.

The Wretched Hive has a few Sub Tropes in increasing size:

See also Gangster Land, City Noir or Industrial Ghetto. When Real Life New York City is portrayed this way, it's The Big Rotten Apple. Has nothing to do with bees.

Often paired with Crapsack World, but differs in that while the setting is less than ideal, the people in it need not be unhappy or universally sociopathic, nor is the worst result the most likely to happen. For cities which literally look like hives, see Hive City; notably, Hive Cities also tend to be Wretched Hives more often than not.

Opposite of the Sugar Bowl and Utopia in general, and Shining City more specifically. If the Wretched Hive improves over time, then it becomes a Heel–Face Town.

If an example fits into one of the more specific sub-tropes better, please list it there, rather than on this page.