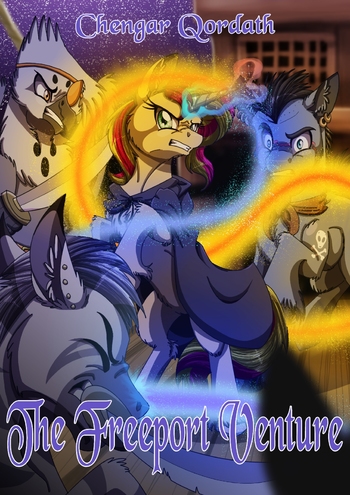 A Recursive Fanfiction of The Life and Times of a Winning Pony, Chengar Qordath's My Little Pony: Friendship Is Magic fanfic, The Freeport Venture follows the misadventures of Sunset Shimmer after she flees Celestia and Equestria and winds up in the lawless island city of Freeport. There, she seeks to make a name for herself as a powerful mage — and, perhaps, an alicorn — in her own right, while also contending with the threats and complications that come with being Freeport's only certified wizard-for-hire.

The currently published stories, in publication order, are A Moment in the Sun

, More Equal than Others

,Tears in the Rain

and Breaker of Chains

, with a side-story featuring Sunset a few years in the future (and in the Winningverse proper) called Princess Twilight and the Disastrously Daunting Dinner Delegates